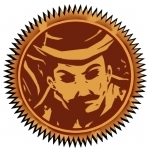 We present you old school arcade shooter game. Shoot bandits and save hostage. Get cash and collect up to 10 gun, each with different effect. Play Old West Shootout online at friv1000.net. You can play it in fullscreen to have fun with it. Old West Shootout is a great Friv 1000 game to play with no cost.

Use Left Mouse button to Aim/Shoot,